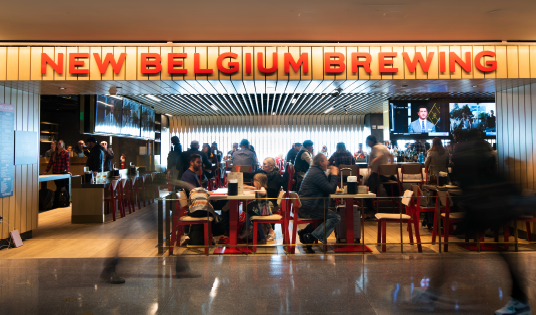 located in Concourse B at Denver International Airport. This newly built space features a 125-seat venue

with a full bar and kitchen giving travelers the chance to experience the look, feel and world-class beer

of Colorado’s largest independent brewery without leaving the airport.

inside the airport, whether it be a first taste upon arrival or a departing cheers,” said Leah Pilcer, New

Ranger IPA, and many of the 100% employee-owned brewery’s 15 year-round offerings. Seasonal and

year. Visitors can delight in finding first-to-market beers and rare one-offs as well as beer-centric

Complementing the tap offerings is a menu created by Paul C. Reilly, executive chef and proprietor of

“Relentlessly local American food is the best way to describe the menu, which will change seasonally,”

said Reilly. “This has been such a fun project working with New Belgium, an iconic Colorado company,

and incorporating their unwavering commitment to quality into everything we serve. We’re proud to

showcase not only New Belgium beer, but the food and spirits of over 20 Colorado purveyors.”

pickled veggies, and a tajin chili salted rim. Many of New Belgium’s beers are incorporated in dishes such

even a vegetarian option in the Voodoo Ranger Grilled Cheese.

The nearly 4,500-square-foot dining oasis serves food all day and accommodates all palates including

vegetarian, low calorie, and vegan options. A full bar featuring beer, wine and spirits is highlighted by a

of gold create a retreat for travelers. For sports fans, state-of-the-art digital technology, including a

“jumbotron” array at the bar, and custom branded shuffleboards which make for perfect ways to pass

time during a layover.

For travelers with little time on their hands, a Grab & Go section offers a quick meal before dashing off

to the gate. New Belgium also offers a selection of branded merchandise, such as brewery t-shirts, hats

and globe glasses, perfect take-home gifts for travelers on the go.

This new concept is a partnership between New Belgium Brewing and High Flying Foods, a boutique,

family-owned and operated company based out of Sausalito, California redefining the art of airport

create this culinary respite providing an amazing taste of Colorado’s beer and food scene, and we

couldn’t be more proud to showcase so many thoughtful flavors in one location.”

as one of Outside Magazine’s Best Places to Work, one of the Wall Street Journal’s Best Small Businesses

and tops Bicycling Magazine’s Best Companies for Cyclists. The 100% employee-owned brewery is a

Platinum-level Bicycle Friendly Business as designated by the League of American Bicyclists, one of

World Blu’s most democratic U.S. businesses, and a Certified B Corp. In addition to Fat Tire Amber Ale,

that is making waves in the airport concessions industry. They approach each local community with the

same measured respect and thoughtful process as they do their our own community of the Bay Area,

and they partner with the most iconic local brands and celebrated chefs, and source from each market’s

local farms. They seek out those who share their values and vision, those who can be their true partners

in the collaborative process., High Flying Foods is pioneering and innovating in the ever-changing airport

Drawing from his upbringing in New York’s lush Hudson Valley, Paul is committed to sourcing only the

highest quality ingredients. Realizing the depth of his culinary passion while attending CU Boulder, he

subsequently moved to Telluride, where he worked at award-winning restaurants Allred’s and 221 South

Oak. Wanting to hone his skills even further, Paul returned to New York to attend the esteemed French

Culinary Institute for formal culinary training. In 2004, Paul moved back to Denver to help open the

acclaimed Mirepoix, followed by a move to Executive Chef/Owner of Encore on Colfax, a longtime

Work/Study Grant, issued to just eight chefs from around the world, and apprenticed at Browne Trading

farm-focused food. In summer 2016, they opened Coperta, a restaurant and bar celebrating the culinary

traditions and food of Rome and Southern Italy, in Denver’s Uptown neighborhood. Since opening, both

taglio and Roman-style pizza. At each of his restaurants, Paul’s constantly evolving menus highlight the

with whom the Reillys have partnered.